about me
cv
texts 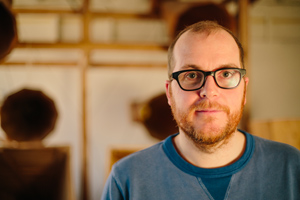 Simon Blackmore makes performative sculptures and installations using sound and custom-made technology. Since gaining a First Class Honours degree in Sculpture at The University of Wales Institute, Cardiff in 1999, and an MA in Creative Technology at Salford University in 2001, he has received numerous commissions and exhibited in galleries Internationally.


In 2006 he was nominated for the Becks Futures Prize, he was artist in residence in Universidad de Los Andes, Bogota, Colombia in 2007, and in 2008 he was awarded the Berwick Gymnasium Fellowship. In September 2013 his work was presented in a solo show at Aldrich Contemporary Art Museum, Ridgefield, USA.


He is also a founding member of the art group Owl Project. Known for their distinctive range of wooden musical and sculptural instruments. Owl Project won the Urbis Best of Manchester award in 2009.


In 2012 their project ~Flow was launched in Newcastle and attracted over 50,000 visitors. Owl project have performed and exhibited internationally, including performances at Les Urbaines Festival (Lausanne, Switzerland), SARC, (Belfast, Ireland) 2009, and a solo show at Lydgalleriet, (Bergen, Norway) 2008. Their recent work was presented in a solo show at Bildmuseet, Umeå, Sweden in August 2013.